One tempest is enough
To break
To shatter
What we knew
What we believed
One tornado of events
Enough to blow away
The foundations of stone
Of human love
Of ethics
One tsunami of tears
Enough to wash away
The regrets
The hopes
The wishes
To wash it all away
Never to be gathered and made into one
All the tornados and the tempests and the tsunami
Could never move me
I was strong and I was holding on
You broke all my bonds
You let me slip and you let me slide
Gathered in a corner
You watched me die
Blown by the tornado
Drowned by the tsunami
Swept away by the tempest
Where I could no longer breathe
I lamented my broken bonds
Our broken lives
Each precious as a pearl
Handed over to nature
Who broke and swept and drowned them all
Broken lives we now live
Empty shells that do not give.

One step ahead of me, you stand
Carrying what I wish, what I want
I cant take that step
Its too hard
To raise my foot, to stamp it
To put it forward, move towards you
You take more steps, farther away now
I stand, looking helpless
For I can never hope to catch up
I stand still, the weight on my heart
I wave at you to stop, to wait for me
Yet you move on, not looking at me
I burn inside, I want you here
I plead, I beg but you go on.

Turning around, I walk away
Towards the other end, away from you
Nothing will pull me around
I wont call me back
I am on a course to save my fragile heart
I cant turn back now
I retrace my steps
I take my words back
I pushed all memories aside
As I move on forward
You wont see me as I wont see you again
Never will I do this, never will I forget
Never will I let you rule me, never will I submit

Like the wisp of smoke and mist make smog
The same way I will fade into the fog
I let you have your way till now
You never cared whether I stayed or not
Just empty words and all that lot
Foolish enough not to see it all
I walked behind you and held your ground
Now I may get selfish, I may think of my feeble soul
My endurance is gone and so is my longing
Futile it is to wait for you
Just doing myself a favour today
I will keep my dignity and just fade away.

This is the story of The Story of which no one has ever heard of. A story burried deep in legends and myths that no one knows the original version any more. It all started with two men carrying one story, shared between them, while on their journey. 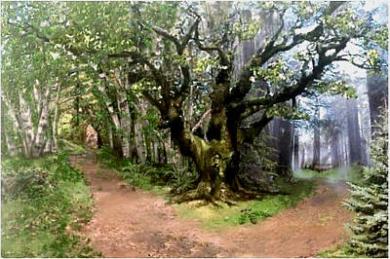 Long, long ago, there lived two men. Men of power, men of wisdom, men of knowledge. They were handed over nothing but mere words. A few words which would shape the destiny of man. Words spun into a Story. A story which could never be sold; effective if hidden and disastrous if told. Setting out from the West, the men moved on.

Two men with two different paths, two visions, two directions, two perspectives, two different lives, carried that One Story within their hearts, a secret between them. In companionable silence, the men journeyed on, travelled far. No one knew their secret. The story was safe.

No sooner than a course of few weeks, did the men falter in their steps.Their companionship had run its course. It had faded and so they parted. Each promised the other to see their task through till the end.

It was a Farewell.

One wanted fame and so he set off on a third path. Not knowing the path was evil, of temptation. Turned rogue with desire, he sold the story. But he spun it differently, a little editing on his part for he had guilt in his heart. A guilt which made him lie, made him alter the story so high that he managed to cover it up. But he had succumbed, had betrayed the ancient oath, had let his guard down, had failed his companion. And so his soul was restless. Meanwhile the story spread on, mixed with lies as a disguise.

The other man chose his own path and walked on, choosing no curves or inviting bends. He kept his head clear and his conscience strong. Somewhere along the road, he was captured. The Story being leaked, they all knew he was the other who carried it along and wasnt a corrupt yet. His heart was true and faithful to the oath and he knew the story without any alterations. Held hostage, he got to know what his companion had done and he cried for his lost loyalty. He was forced to give the story but he too altered it for it was too dangerous to expose the real words. To maintain the sanctity of  The Story, he lied and gave a different version. But the kidnappers were no noble men. They pried the story from him and slit his throat. Poor man died for his oath.

Years passed and the two stories of the two men were made two legends. The legends turned to myths and myths got old. The Story, the original words were buried deep beneath the lies. It was safe.

The one who betrayed was later poisoned while the other had already been murdered. The two men met with two fates while journeying along two paths with two perspectives of one story.

My life, a bed of roses, you say?
So easy as breathing, so effortless
If hurting at every point of life isv what you call a bed of roses
Then I agree with you
If pain be my companion for life
Then add to the roses you see
If loss is what you think is bliss
Then add that too into your list!
If betrayal is what you call the beauty
Then be it, say that too!
Envy me for all those roses with thorns
Wish for all that you say I have
But only He knows what I am
What I have and By God
It totally isnt the red and the roses
Its way far from it
See my pain, feel my loss
Feel the betrayal, know the cause.

Hollow, empty words echo all around
Saying something no one understands
Being the best, but being the worst too
Lies, deception and farce
Fake and what not
They say, they make believe
In the end, only words.
Only words they are
Spoken without fear, without guilt
Made known time and again
Something no one wants to hear
We are all the same
With nothing in our greedy hands
Only mouths filled with wonderful words
Speeches overflowing the paper, ink dried on the white
Like little scars for all the lies
Only words in the end.

I thought you were a friend
How naiive I was to believe you
All those laughs and all those talks
All the sharing and sticking together
How I fell for it, How really you proved me wrong
You broke my trust, you shook my ship
You betrayed, you lied to me
You backstabbed, you were a fake
You are mean and you are double faced
I wont forgive you, just slam a brick in your face
There’s a hatred in my heart so deep
I wont spare you, I wont let you go
You will pay for the friendship you sold
You will reep for all the hurt you gave
I will kill you and I will slay you
I will burn you
And I wont stop until I break you.

The day with its brightness; the night with the dark; the heart with illumination; the soul with the spark! That is who I am. A part of the universe; a part of whole wide world.

Shifa Naseer
Create a free website or blog at WordPress.com.