Now that my 20th birthday is past me, I would like to add another “About Me” page for I realised that I have changed a lot since the last time I wrote one of these introduction pages.

First and the foremost, the friends I had made in college initially were lost with time and I realised that I can make better friends than those people. I guess the initial friendships are more fragile. One of those friends, Shlagha, stayed with me and entered 2015 with me. Because of her, I am more social than I have ever been in my life. She taught me how to behave socially and because of that I have so many new friends. They made my 20th birthday so special that I am at a loss for words.

I have become more independent than I ever was. Even though my struggles havent become any less or easier but these people make it hell lot more tolerable. 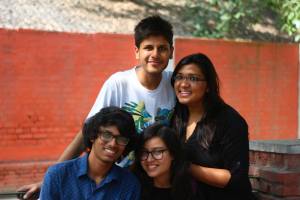 The health drive that I had started went down the drain and I ate a lot of junk food and because of that, I am a little fatter than I was. Maybe thats a good thing, maybe not!

My birthday went really well. I would’ve uploaded the pictures here but I am too lazy for that. I got so many gifts and so much love that I was surprised beyond expression.

I lost my old spectacles and had to buy new ones. I am careless!

I can walk up to random people and talk like I knew them forever!

My frequency of nightmares has increased. I have nightmares almost on a daily basis which spookes me out.

I think thats about it. I dont know what else I did these months. I think I am growing up finally. Its scary!

Care To Share Your Views? Please Do! Cancel reply

The day with its brightness; the night with the dark; the heart with illumination; the soul with the spark! That is who I am. A part of the universe; a part of whole wide world.